New Player Help for  Final Fantasy 7 Remake covers various information that will help a player understand the basics of the game's mechanics as well as recommended things to do before starting the game. The aim is to help both new and veteran players to further understand the game and to know what it has to offer. 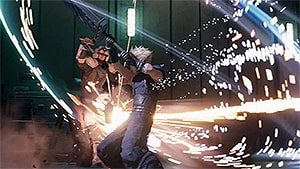 At the beginning of the game, you'll immediately be thrown into a mission where Cloud  and the members of AVALANCHE, Jessie, Biggs, Wedge, and Barret , infiltrate Mako Reactor 1. The combat system for the game will allow players to have full control of each playable character which gives freedom on how to approach each battle encounter. Remember that each enemy in the game is different from one another in terms of attacks, moves, strengths, and weaknesses. Each character will, of course, have their standard basic attacks by pressing the square button. However, don't just spam that button to deal basic attacks, you'll want to keep an eye on the ATB Gauge which is the blue bar under the HP bar that's at the bottom right of the screen. Attacking enemies with your basic attacks fill-up the ATB bar, and once you have enough charges, you can use it to issue battle commands such as abilities, using items, and casting spells. Characters can also use Limit Breaks, which does not require ATB to use. Mixing up combat skills to execute combos that can damage and stagger enemies is the best way.

In conjunction with the combat mechanic, you can now guard and evade enemy attacks. Guard against physical and magic attacks with [R1]. A successful guard greatly reduces the amount of damage suffered and also charges your ATB gauge slightly. And if guarding does not work on all enemy attacks, use the [Circle] button to evade instead. Sometimes offense isn't always the best way to win a battle, but sometimes, you may need to stop and defend to gather your thoughts and think of a new strategy to defeat a challenging enemy.

However, it should be noted that guarding should, most of the time, be favored instead of dodging. Unlike other games that feature a dodge mechanic, in Final Fantasy VII Remake they do not grant any invincibility frames, and are just a way to get out of harms way. Some enemies have very telegraphed attacks that can be dodged when properly timed, however, many use area of effect attacks that will still reach characters even when they try to dodge. Certain attacks will hit the player no matter what, so make sure to guard to reduce the damage taken. 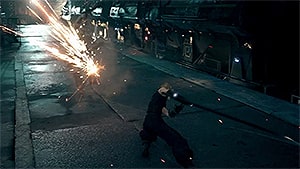 If ever you are caught in a situation where you're out of MP and all you can do is unleash your abilities, the remake introduces a new combat mechanic which is the use of Unique Skills. In the remake, each character will have a unique skill that can be used in battle. And this can be used anytime you want in battle. Simply press the [Trinagle] button to activate the character's skill. Although using a skill does not require an ATB charge, some character skill requires time to charge. 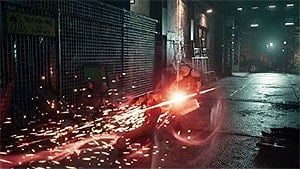 Abilities play an important combat mechanic of the game. Abilities are divided into two categories, a weapon ability is an ability that are exclusive to each playable character and can only be found and used if you equip a certain weapon. For example, equipping the Iron Blade weapon grants Cloud access to use the Triple Slash, and if ever you change your weapon to the Buster Sword, the Focused Thrust will be available to use. And what if you want to use a specific ability that you prefer but you'd rather equip a stronger weapon? Well, each weapon has a weapon proficiency, which increases each time the ability is used; maxing out its proficiency permanently unlocks the weapon skill, making it available for the character at any given time, regardless of weapon equipped. Second is a Materia Ability, which are linked to a

Command Materia. Any character can equip a 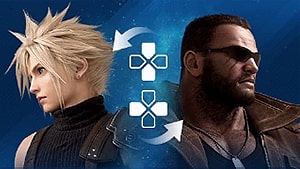 In the Remake, players can switch between active party members or issue commands to them. Each playable character works the same way in terms of ATB, HP, and MP management, however, they differ in gameplay styles, with different weapons, abilities, unique skills, attacks, moves, strengths, and weaknesses.

Cloud specializes in close-range combat and can take on large groups thanks to the range of his sword, however, is limited against facing against airborne enemies or those he can't reach. Luckily, you have characters such as Barret and Aerith, who can attack enemies that Cloud or sometimes Tifa can't reach. If you find yourself in a situation where you encounter airborne type of enemies, quickly switch between Characters by pressing the directional buttons to take control of the situation - also, if you're out of battle, take your time to review each character's stats and their strengths in the main menu or by checking the Manual.

Switching between characters in combat is key to make the best of their abilities and maximize combat efficiency.

Magic Materia allows you to use spells such as Fire, Blizzard, Thunder and many more, and require ATB and MP to use. Command Materia grants the wearer unique abilities in battle, that use ATB, such as Assess and Steal. Support Materia can grant unique effects when linked with other specific materia, such as Magnify (which makes Magic Materia affects all opponents/allies). Complete Materia provides passive effects to the wearer, such as increased max HP or MP, or bonus ATB charges when staggering enemies. Finally Summon Materia grants the user to invoke a summon creature that will aid the party in battle (however they have special requirements to be summoned).

Each materia has a level, indicated by the star symbols next to its name. The higher the level, the more powerful the materia will be (i.e. Magic Materia grants access to higher ranks of magic or different spells altogether). Materia can be leveled by obtaining AP, which is rewarded from killing enemies.

Call forth your Summon 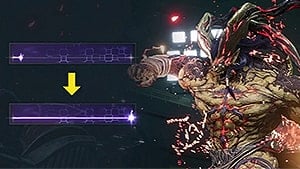 When facing a formidable enemy in battle, the entity slumbering within an equipped summoning materia may begin to stir, and the summon gauge may appear. When this gauge has completely filled, you can call upon the Summon for assistance. Summons fight alongside you for a brief period and their remaining time is indicated by their gradually decreasing gauge. These beings have a will of their own and engage the enemy as they see fit. However, you can command them to unleash unique attacks by expending your party members' ATB charges. As it departs, a summon will always execute a devastating ultimate attack. 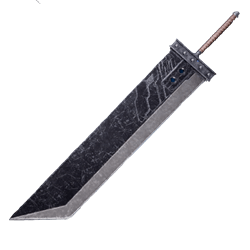 Characters can equip a weapon, a piece of armor, and an accessory. Weapons and armor have

materia slots that grant the use of spells and abilities. Those equipments can be bought at Shops found in residential areas and establishments to find, and can also be found in treasure chests. Some specific equipment, however, can only be obtained by stealing from enemies.

Weapons boost attack power and magic attack power, and each have a different battle ability that can be learned by maxing out the weapon's proficiency. Armor boosts defense and/or magic defense. Accessories are special equipment that have various effects, such as fending off status ailments or boosting attributes such as strength or magic. 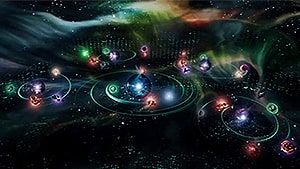 Weapon upgrading is introduced in the remake which broadens the spectrum when it comes to character customization and combat effectiveness. Whenever the character levels up, they gain SP (Skill Points), which can be be used to unlock weapon skills, which have various effects. Some boost attack power or magic attack power, while others add materia slots. The amount of SP required differs depending on the skill within its specific core. When a character levels up and the max SP of their equipped weapon increases, that weapon equipped also levels up. There are also valuable items called Scriptures, that can raise your max SP. When a weapon levels up, a new core is added and more weapon skills become available.

In order to reset the weapon upgrades, the player must talk to Chadley and pay a small fee of 100 gil per weapon. Doing so will revert the weapon to its default state, removing all unlocked weapon skills and refunding the SP. Each weapon has its own SP value, but the total is always equivalent to the weapon level. 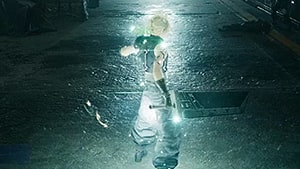 As you progress through each chapter of the game, you'll encounter stronger enemies that are capable of dishing out some serious damage. If all your party members die during the battle, it's game over. However, players can try again from the last battle or last checkpoint, instead of being taken to the title screen and reload the save file.

To avoid a game over, make sure to be well equipped, well stocked on healing items, which can be bought from vending machines and shops, have each character equip a Healing Materia Using remedial and support spells such as Barrier and Esuna will also be helpful in battle and can turn the odds of winning over to your side. 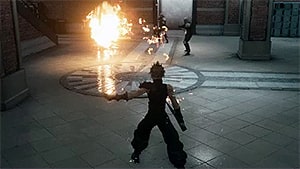 Spells have always been an important mechanic of the game in every Final Fantasy series, and there's no exception to that in the remake. In Chapter 1, you will already have access to conjuring a few spells, so use them in battle! Exploiting the enemies' elemental weaknesses is guaranteed way to win, specially when they are pressured, which will exponentially increase the amount of stagger inflicted. A good deal of enemies as early in the game are weak to Thunder and Fire.

Casting spells require an ATB charge and MP. In order to replenish MP, the player must either drink Ether, sleep on Inns or benchs, or destroy Shinra Boxes to find Mako Shards which are used to slightly replenish your character's MP. 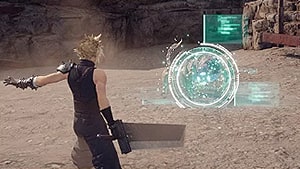 Once you reach Chapter 3: Home Sweet Slum, you'll be able to gain obtain the Assess Command Materia, which can be used scans the enemy for information, elemental and status weaknesses and resistances, and stats, at the cost of 1 ATB charge. Once you have successfully scanned the enemy, you can access their information at any given time during battle, without having to use Assess again, by pressing the touchpad of the PS4 controller of the targeted/locked-on enemy. In addition, the enemy information will be added to the Enemy Intel option found in the menu. 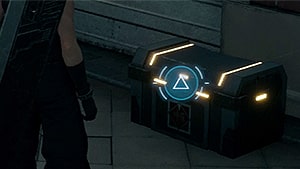 Exploration is key in every RPG, as you might find some important items, NPCs, shops, and many more that may help you later on in the game. Scattered in each location, you can find chests that contain useful items and even equipment, as well as Shinra Boxes that you can destroy to obtain Mako Shards, and occasionally, some other items, such as Potions, Ethers and Antidotes. 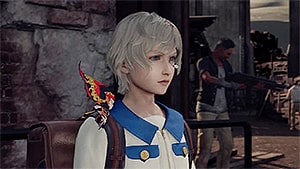 Once you reach Chapter 3: Home Sweet Slum, you'll meet Chadley, an intern at Shinra, who wishes to join Avalanche's cause and destroy them from within. Upon completing his side quest, he'll ask you to collect data for him by completing Battle Intel. Make sure you complete each and single battle intel to obtain special rewards and for him to forge new Materia which he can sell. After you complete his side quest, his shop, Chadley's Secret Research. Apart from that, you'll also gain access to VR Missions where you enter a simulation and battle against various foes, this is very important because you can obtain a couple of Summon Materia by completing a VR Mission such as Shiva.