Characters in Final Fantasy 7 Remake are the playable characters of the game, each character consists of their own unique set of attacks, abilities, skills, stats, and equipment. Players take control of Cloud Strife, the main protagonist of the game, as well as creating a party of up to two allies, in the remake, players can now switch to different characters depending on the battle situation. Players can also stick with the same character and issue orders to party allies. This page covers a list of all the playable characters in Final Fantasy VII Remake.

The main protagonist of the game. An ex-SOLDIER: first class, Cloud came to Midgar to start a new chapter of his life as a mercenary. At the invitation of his childhood friend, Tifa, he accepted a job with Avalanche. He may bring his buster sword to bear against Shinra troopers, but he does not care for the plight of the planet. For him, this is a job and nothing more.

The leader of an independent Avalanche cell in Midgar, Barret was disavowed by the old guard for his extreme methods that attracted too much attention. He subsequently came to Midgar, where he resolved to continue to pursue his vendetta against Shinra with a small but trusted group of followers. When not fighting against the corporation, he and his comrades serve in the neighborhood watch and keep the people safe─including his daughter Marlene, who he dotes on as a loving father.

Aerith is a flower seller who lives in the Sector 5 slums, who first meets Cloud on the streets of Midgar after the bombing of Mako Reactor 1. Shinra has kept a close eye on her ever since she was a child, as she has the ability to hear the voice of the planet. She is often found tending a modest bed of flowers at an old church in Sector 5.

A loyal member of Avalanche─an underground organization opposed to Shinra─Tifa also runs Seventh Heaven, a popular bar in the Sector 7 slums. Although she bears a terrible grudge towards Shinra, she is not convinced that bombing mako reactors is the solution. As she struggled to reconcile her cause with her conscience, Tifa was reunited with her childhood friend, Cloud, for the first time in years...

Currently NON-PLAYABLE. Red joins your party but you cannot control him. A red lion-wolf-like beast, Nanaki or better known as Red XIII is a specimen that was held captive by the Shinra Corporation and was experimented on by Professor Hojo, he is a warrior who wishes to fulfill his duties of defending the planet. 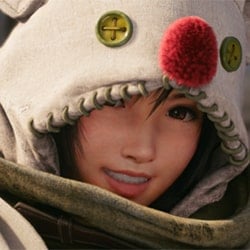 Yuffie Kisaragi is a ninja from Wutai who sneaks her way into Midgar and devises a plan with Avalanche HQ for a thrilling mission to steal the ultimate materia from the Shinra Electric Power Company. 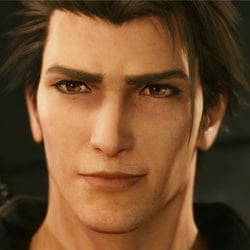 COMPANION CHARACTER. Sonon trained under Yuffie's father and harbors a deep resentment for Shinra, following the devastation caused by the war between Shinra and Wutai. He has been assigned to work with Yuffie as she infiltrates Midgar - essentially making her his boss.