Unique Skills in  Final Fantasy 7 Remake are unique moves that are used in battle. Every playable character has a unique ability that can be activated in battle by pressing the

button, these do not require a segment of an ATB bar and can be used at your disposal. This page covers a list of the unique abilities of the playable characters in the game.

Cloud's mode shift ability allows him to switch between his balanced operator mode and his-attack oriented punisher mode. Press the

Operator Mode: In operator mode, Cloud can execute quick attacks, guard against ranged attacks and magic. Operator mode is the default mode Cloud is in when he is in battle.

Punisher Mode: In punisher mode, Cloud moves more slowly, but executes more powerful attacks than usual. In addition, Cloud launches a counterblow every time he guards an enemy's melee attack. He cannot, however, guard against ranged attacks or magic. When you evade such attacks, Cloud will switch back to Operator Mode.

while in control of Barret to deliver a heavy-hitting attack that fills a large portion of his ATB Gauge. Once unleashed, it takes a long time to recharge his attack. Pressing

, however, will speed up the process.

As Aerith, you can hold down the

button to focus your magical energies and release it to unleash Tempest, a powerful magical attack. The potency of Tempest depends on how much magical energy Aerith has stored up. Depending on the situation, you may want to store small amounts of energy and release spells in low-powered bursts, or bide your time and unleash a particularly devastating blast of magic.

As Tifa, you can press the

button to execute a martial technique, the Whirling Uppercut. To access more advanced techniques, you must use Unbridled Strength to increase your chi level. At level two, Tifa will execute Omnistrike, and at level three, Rise and Fall. Upon utilizing an advanced technique, you will expend chi and drop one level. 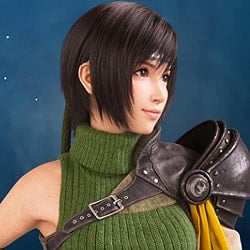 , Yuffie can hurl her weapon at a target. Press

while it is away from her to perform long-range ninjutsu attacks. The weapon will return to Yuffie automatically after a certain amount of time. To retrieve it sooner, press