Mini-Games is a feature in Final Fantasy 7 Remake that can be found on different locations and provide with fun and interactive activites for the player to enjoy. Below you can see a list of all Mini-Games in Final Fantasy VII Remake, and a complete guide on how to beat them.

Press the [X] button to throw darts. The point value of the area you hit is deducted from your point total. You throw three darts per round, and the goal is to reduce your point to exactly zero in as few rounds a possible. The smaller the target reticule, the more accurate your throw will be.

How to Score Big

For the most points, aim for the bull's-eye in the center of the dartboard or the narrow double and triple rings. However, if you score too many points and reduce the running total to below zero, the round is voided and none of the points scored are counted.

When you can win the game with the next dart, the are of the dartboard you should aim for will light up.

Perform more squats than your opponent in the allotted time to win. In the event of a tie, you will lose. Follow the on-screen guide and press the corresponding buttons at the right moment to perform squats. As you proceed, the guide will gradually fade from view, and you will have to watch Cloud's movements to determine when to press the appropriate buttons.

With each successful squat, your pace will increase, along with the speed with which you will have to respond. However, acting too slowly or too quickly will cause you to stumble.

When competing against more skilled opponents, Cloud will grow more fatigued, and the chance that he may get caught in a sticking point will increase. When this happens, you must press the corresponding button repeatedly until the gauge is filled. Poorly timed button presses build more fatigue than perfect ones. 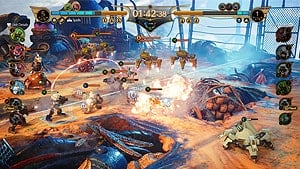 Fort Condor is the newest mini-game that is added with the Episode INTERmission DLC. Fort Condor is the name of the game, where Yuffie will get to take part in a strategy game inspired by Shinra’s military campaigns. Here two players will deploy units to conquer each other’s bases, and defend in the process. You first need to select a board, this will determine how many ATB charges you will have and the materia available.

Then you can set up the units that you want to deploy. ATB charges are used to deploy a unit, once deployed it will move forward to your opponent’s base, automatically playing out the attacks on the enemies it encounters. Each unit is assigned a role: vanguard, ranged, or defense. This will ultimately determine which enemies it will be effective against. Materia can also be used to cast spells.

Keep an eye on timing as each orb can only be used once per match, so using them at the right moment is key. The mini-game is not just for fun, as according to whispers on the street, if you win against the grandmaster you can gain some rare materia.

Fort Condor is a board game where you deploy units and material to destroy your opponents headquarters.

Speak to anyone with with the 1 symbol above their heads to challenge them to a match. The higher their rank, the tougher they will be.

You can select what board to use--which will determine the number of ATB charges and material available to you--along with the units you wish to deploy.

Check what units are board your opponent plans to use and just accordingly.

The opposition's board and unit loadout is displayed on the right.

Each unit has a weakness that can be exploited for massive damage, Therefore, keep in mind which units your opponent is using when selecting yours.

Unit Costs: Each unit has an ATB cost required to place it on the board. Your ATB charges, which refill over time, can be viewed at the top of the screen.

These are special units that do not move or attack--instead, they spawn other units. For every unit they spawn, however, their HP depleted by a certain amount. Make sure to place them in locations that are hard for enemy units to reach if you want to use them effectively.

Move the cursor to the pot you wish to deploy a unit, then press

to begin selecting the unit you want.

Deploying a unit expends a number of ATB charges equal to the unit's cost. You cannot deploy units that cost more charges than you currently have available. Your ATB charges, however, do refill over time.

Once deployed, a unit will automatically advance toward the opponent's territory. When it makes contact with an enemy unit, it will engage the foe in battle.

You can move the cursor anywhere within your own territory and as far as your farthest unit has advanced. Extend the frontline deeper into enemy territory to press the advantage.

Materia allows you to use powerfulspells during a mtch. Press L1 to select a location to cast your magic. Once you have made your decision, press X to unleash the attack. Offensive spells work differently in Fort Condor, in. thatthey do not deal elemental damage. Instead, each spells has its own unique attack pattern.

Spells can only be used once per battle, so knowing when and where to cast them is key.

Destroy as many boxes as possible within the time limit. Each box will add to your score, and when the timer reaches zero, the game is over. Reach the target score to win. The durability, effects, and score differ with each type of box.

Perform more pull-ups than your opponent in the allotted time to win. In the event of a tie, you will lose.
Follow the on-screen guide and press the corresponding buttons at the right moment to perform pull-ups.
As you proceed, the guide will gradually fade from view, and you will have to watch Tifa's movements to determine when to press the appropriate buttons.
Be warned, however, that the button order changes per round.

With each successful pull-up, your pace will increase, along with the speed with which you will have to respond. However, acting too slowly or too quickly will cause you to slip.

When competing against more skilled opponents, Tifa will grow more fatigued, and the chance that she may get caught in a sticking point will increase. When this happens, you must press the corresponding button repeatedly until the gauge is filled.
Poorly timed button presses build more fatigue than perfect ones.